This is an archival version of the original KnowledgePoint website.

Interactive features have been disabled and some pages and links have been removed.

Taps being left on

KnowledgePointAdmin
RedR CCDRR
related country: South Africa
updated 2017-12-20 11:21:16
I know this seems like an odd question but a supporter has said that: It is tribal custom to send the youngest member o ...

Cristian Anton
WaterAid
updated 2014-09-04 10:20:26
This is certainly an issue in refugee camps and for this reason Oxfam developed emergency tap stands which you push up t ...
1

Training people in water wastage is one of the core difficulties I have encountered in both development and emergency. Even self-closing taps get tied in the open position and then left.

As an extreme example, I worked on a Greenpeace ship some decades back as an engineer. We had limited capacity for fresh water, an educated and, one would assume, aware crew, yet we continuously found taps left running. In the end, we actually had to introduce water rationing to confront the problem. It was only after this that we had a pretty much 100% compliance in terms of closing a tap after use.

The moral of that little story is that essentially, education, education, education is the answer. This is the only real solution. And as mentioned by Martinager - tap-stands should have an adequate apron and drainage to avoid the mud, as this has, in itself, potential health hazards.

A key factor is always involving the users in the design of facilities, of whatever type. This can be entirely 'hands off', such as in the development of the Zimbabwean Blair Toilet (AKA VIP latrine), where Peter Morgan simply built lots of different designs and then observed how they were used and performed -- for instance doors were abandoned when they fell off and people chopped them up for firewood! Alternatively a more proactive approach may give more of a sense of community ownership than simply decreeing that they should form a committee or close taps.

In the case of water points this should include observations or surveys to determine who collects water, at what time of day, what containers are used and how they are carried. People tend to do things for a good reason. For instance self closing taps are sometimes wired open because the tap is too high to fill a narrow necked plastic jerry can without most of the water missing the hole; a plinth to stand the container on may be a great help in this and also would be very useful if people carry containers on their heads. A second, higher plinth might also be helpful too, I have seen supermarkets in Africa with a special perch provided at the checkouts to enable people to slide heavy baskets across onto their heads. A short length of hose permanently attached to the tap, although less hygienic may also help reduce waste.

Another reason why self-closing taps are tampered with is where water vendors collect from public water points. If this is the case then special provision is probably needed to cater for vendors.

The other thing that should be done is to build prototypes or mock ups of different designs and invite people to use them, but you need to make sure the right people are involved. There is no point in inviting men to test water points if they rarely collect water. Location of water points is another area where community input may also encourage a sense of ownership.

This could seems a odd but it happens frenquetly because of:

Ownership by the community, or lack thereof, is a common ailment. Get the community together and try to get them involved in a solution. There are various approaches that can be used based on cost or value or even guilt, but if the community does not get involved, and recognizes the problem as a problem, any outside provided solution will be short lived.

If you get the community involved you may find an idea that sticks.

A cheap form of self-closing tap is a cistern float valve with a bungee spring, used for latrine handwash facilities in camping communities in the UK.

To cater for a child needing to use two hands to hold a container, the valve can be treadle operated.

This diagram is for a jerry can in the home, but is also applicable to a mains supply: 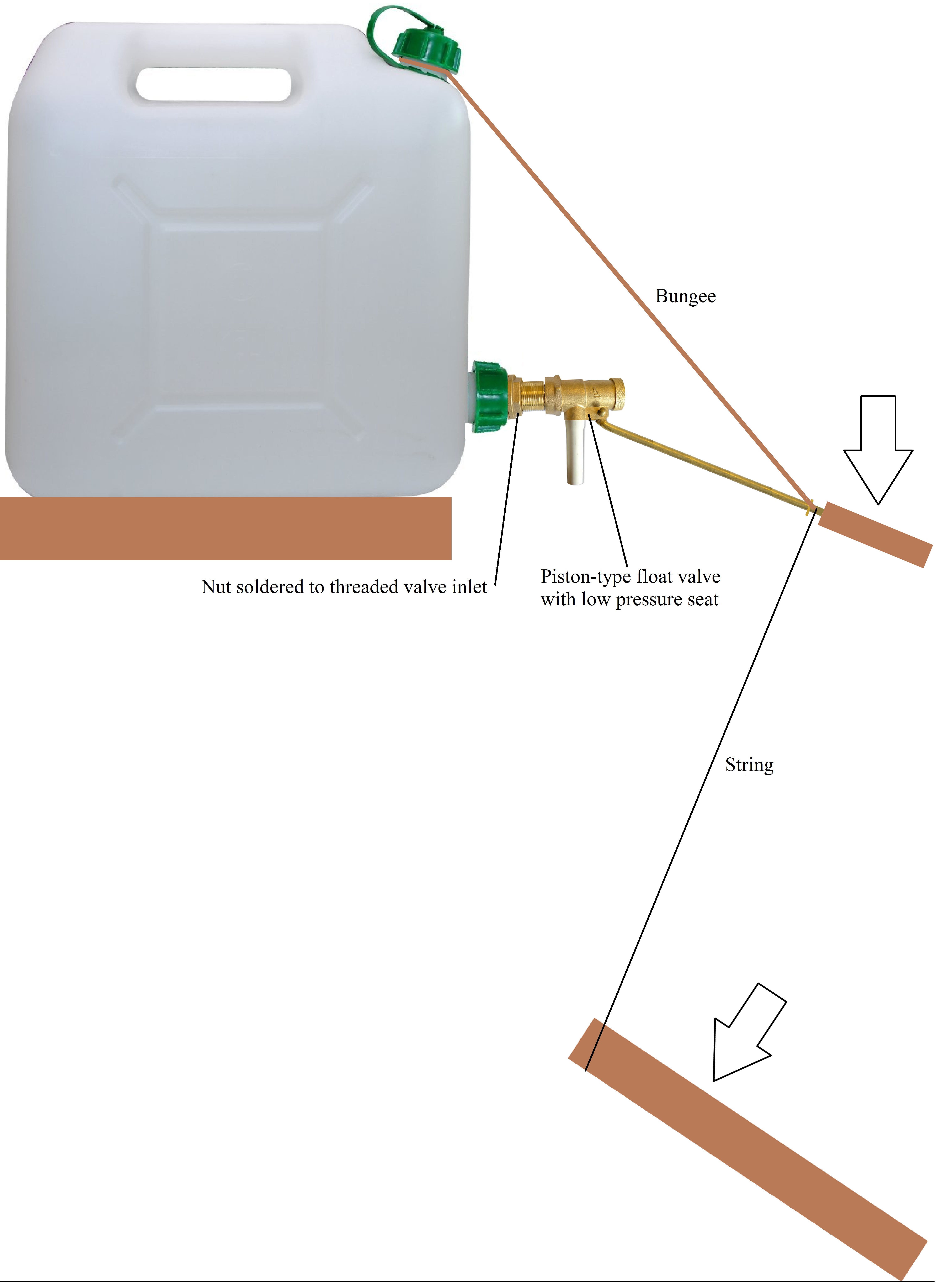 This thread is public, all members of KnowledgePoint can read this page.

What is capital maintenance expenditure (capmanex) and how is it different from operation and maintenance?

How can I remove chlorine taste from water?

Where can I find detailed designs for Rope Pumps?

Water treatment: what is a reverse osmosis system?

What is the difference between rehabilitation and repair or service maintenance of hand pumps?

Toolboxes for water and sanitation utilities